or by using the aforementioned PPA. 2.8.5 has two high-priority bug fixes, including a fix for failing to allocate AUTO IP addresses and a carry-along fix for unconfigured interfaces when doing complex VM composing. No other changes have been made to MAAS with this release.

or by using the aforementioned PPA. 2.8.4 has a single bug fix. No other changes have been made to MAAS with this release.

or by using the aforementioned PPA. The focus for this release has been bugfixing and more bugfixing. No other changes have been made to MAAS with this release.

Note that there is a workaround for those not ready to upgrade to 2.8.3, specifically, using the CLI to commission machines without testing them:

or by using the aforementioned PPA. The focus for this release has been bugfixing – there were no changes to MAAS since RC1.

Thanks to everyone who reported the issues with previous 2.7 releases and helped us with the logs.

Following on from MAAS 2.7, we are happy to announce that MAAS 2.8 is now available. This release features some critical bug fixes, along with some exciting new features.

Six questions you may have:

MAAS 2.8 adds the beta capability to use LXD-based VM hosts and virtual machines (VMs), in addition to the libvirt-based VM hosts/VMs already available. These new LXD VM hosts use the same underlying technology as libvirt (QEMU). Unlike libvirt KVMs, though, LXD VMs can be managed without requiring SSH access to the VM host. LXD are remotely accessed via secure HTTP transport, which provides better security for LXD-based VMs. In addition, LXD has a better API, and is part of a much larger constellation of enterprise software, offering a wider range of future features and use cases.

Within MAAS 2.8, we have made a number of performance improvements to everything related to the machine listing. Some of the most visible changes involve the way that long lists are presented within categories (see the example below), but there are a number of other changes that make the list easier and more efficient to use. 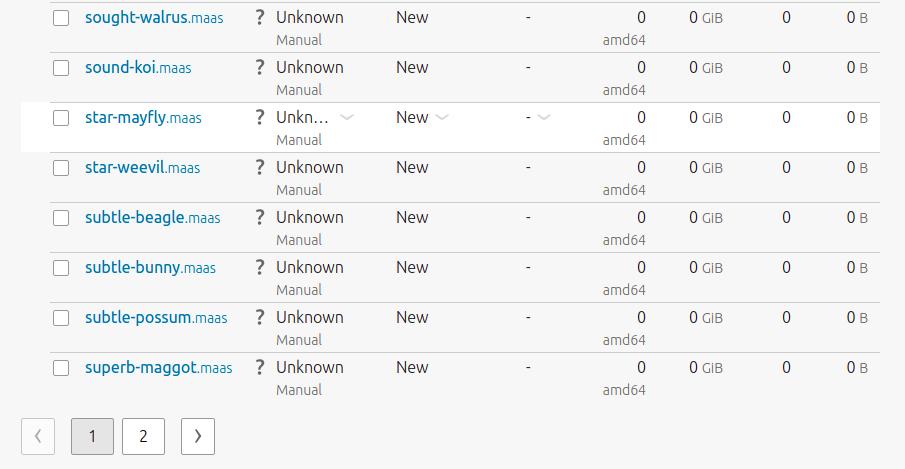 Among those other changes are persisting UI state for grouping, new grouping options, bookmark-able URLs with filter and search parameters, and many other performance improvements. If you’re interested in more details, see this blog post.

In order to make MAAS more scalable, we have separated the MAAS database from the MAAS snap, so that the DB can be situated separately. MAAS 2.8 now allows the MAAS DB to be located outside the snap on localhost, or on a separate, external or remote server. We complement this capability with extensive instructions for setting up and managing this configuration. To support those who are testing MAAS, we’ve also provided a test DB configuration that embeds the database in a separate snap that can easily be connected to MAAS.

We’ve also fixed number of bugs (see the list in Launchpad). Notable among these are the following:

MAAS 3.0 incorporates a large number of bug fixes, summarized in the sections below. Please feel free to validate these fixes at your convenience and give us feedback if anything doesn’t seem to work as presented in the bug request.

One particular bug, #1916860, involves failures in the IPMI cipher suite in MAAS 2.9.2 and up, on the Lenovo x3650 M5 (and others). This particular bug is a not a MAAS bug, but a firmware issue with the subject machines. While the MAAS team can’t fix this (hence the assignment of “Won’t Fix”), the team did provide a easy workaround which helps circumvent this issue.

Here are the bugs that have been Fix Released in MAAS 3.0 Beta 2:

Here are the bugs that have been Fix Released in MAAS 3.0 Beta 1: