During machine enlistment, deployment, commissioning and machine installation, MAAS sends Tempita-derived configuration files to the cloud-init process running on the target machine. MAAS refers to this process as preseeding.These preseed files are used to configure a machine’s ephemeral and installation environments and can be modified or augmented to a custom machine configuration.

The Tempita template files are found in the /var/snap/maas/current/preseeds/ directory on the region controller. Each template uses a filename prefix that corresponds to a particular phase of MAAS machine deployment:

Additionally, the template for each phase typically consists of two files. The first is a higher-level file that often contains little more than a URL or a link to further credentials, while a second file contains the executable logic.

The enlist template, for example, contains only minimal variables, whereas enlist_userdata includes both user variables and initialisation logic.

Tempita’s inheritance mechanism is the reverse of what you might expect. Inherited files, such as enlist_userdata, become the new template which can then reference variables from the higher-level file, such as enlist.

MAAS interprets templates in lexical order by their filename. This order allows for base configuration options and parameters to be overridden based on a combination of operating system, architecture, sub-architecture, release, and machine name.

Some earlier versions of MAAS only support Ubuntu. If the machine operating system is Ubuntu, then filenames without {os} will also be tried, to maintain backward compatibility.

Consequently, template files are interpreted in the following order:

The machine needs to be the machine name, as shown in the web UI URL.

The prefix can be either enlist, enlist_userdata, commissioning, curtin, curtin_userdata or preseed_master. Alternatively, you can omit the prefix and the following underscore.

For example, to create a generic configuration template for Ubuntu 16.04 Xenial running on an x64 architecture, the file would need to be called ubuntu_amd64_generic_xenial_node.

Any file targeting a specific machine will replace the values and configuration held within any generic files. If those values are needed, you will need to copy these generic template values into your new file.

You can customise the Curtin installation by either editing the existing curtin_userdata template or by adding a custom file as described above.

Curtin provides hooks to execute custom code before and after installation takes place. These hooks are named early and late respectively, and they can both be overridden to execute the Curtin configuration in the ephemeral environment. Additionally, the late hook can be used to execute a configuration for a machine being installed, a state known as in-target.

Each component of the given command makes up an item in an array. Note, however, that the following won’t work:

This syntax won’t work because the value of sh's -c argument is itself an entire command. The correct way to express this is:

The following is an example of an early command that will run before the installation takes place in the ephemeral environment. The command pings an external machine to signal that the installation is about to start:

The following is an example of two late commands that run after installation is complete. Both run in-target, on the machine being installed.

The first command adds a PPA to the machine. The second command creates a file containing the machine’s system ID:

It’s easy to customise cloud-init via the web UI. When you’ve selected a machine and choose ‘Take action >> Deploy,’ you’ll be presented with the following screen: 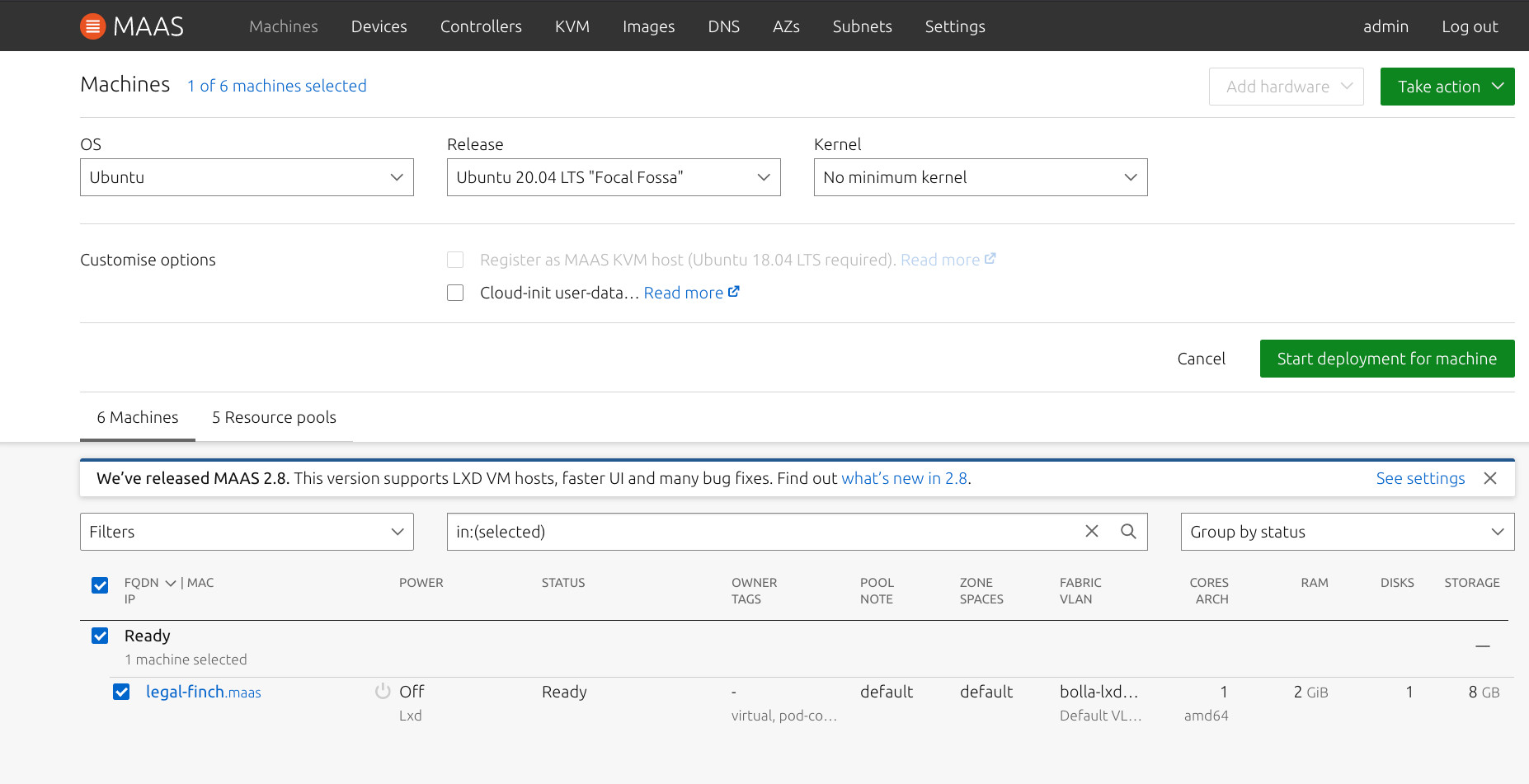 Select a viable release (in this case, “Ubuntu 18.04…”) and check the box labelled “Cloud-init user-data…”: 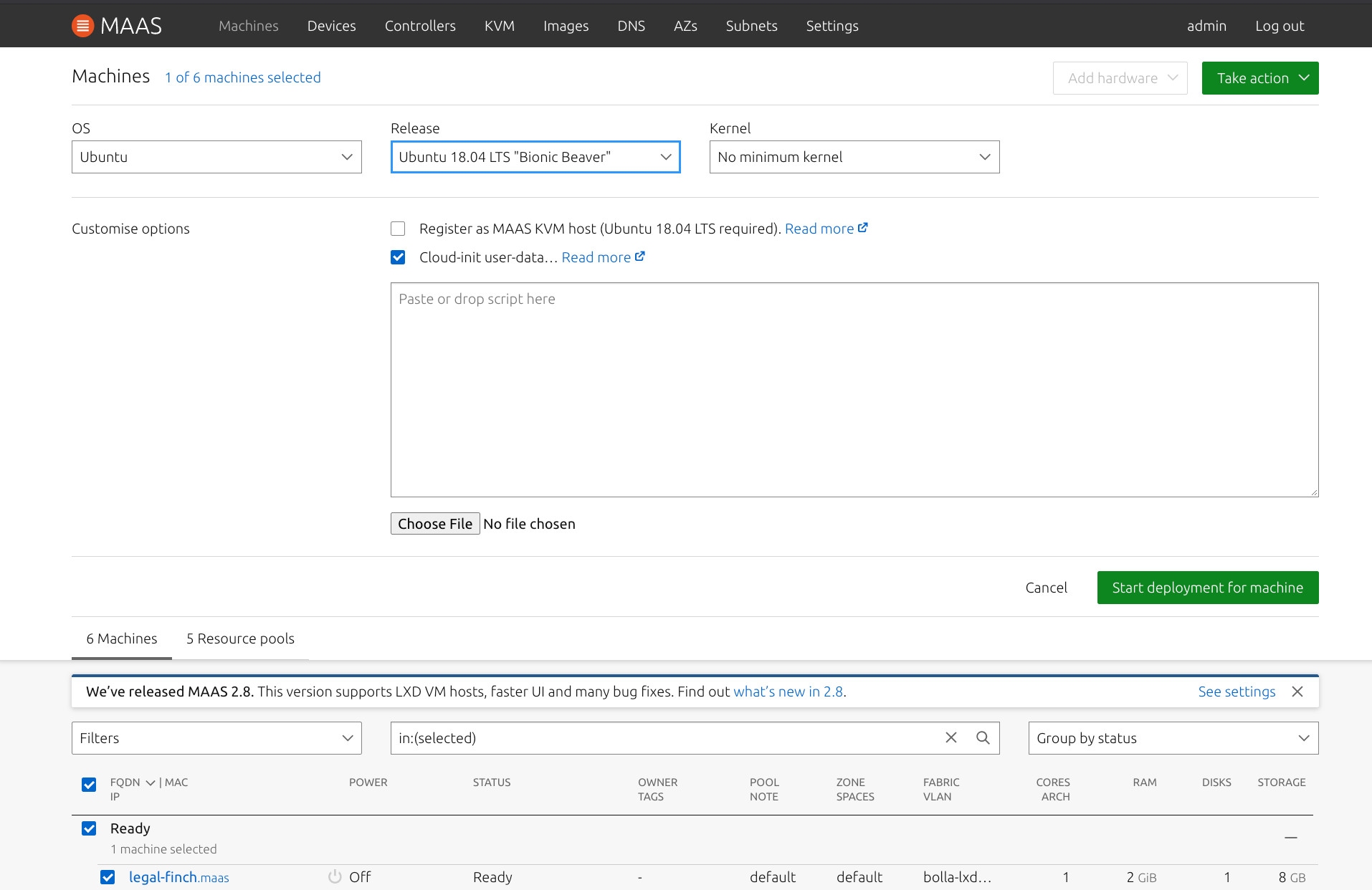 Paste the desired script directly into the box, and select “Start deployment for machine.” For example, to import an SSH key immediately after your machine deployment, you could paste this script:

No script validation of any kind is provided with this capability. You will need to test and debug your own cloud-init scripts.