Show and Tell: A public set of Discourse editing tools

This repository grew out of the documentation needs of the MAAS team, but the team and the company also want to contribute to open-source in a meaningful way.

The entire talk is also found in the radtools manpage, which is reproduced below the video – and which is available in the github, along with instructions on how to install a manpage on your Linux system.

Please enjoy. We welcome feedback, PRs, and additional Discourse code that can be added to this repository. FOSS is what you make it, so let’s make it as useful as possible. 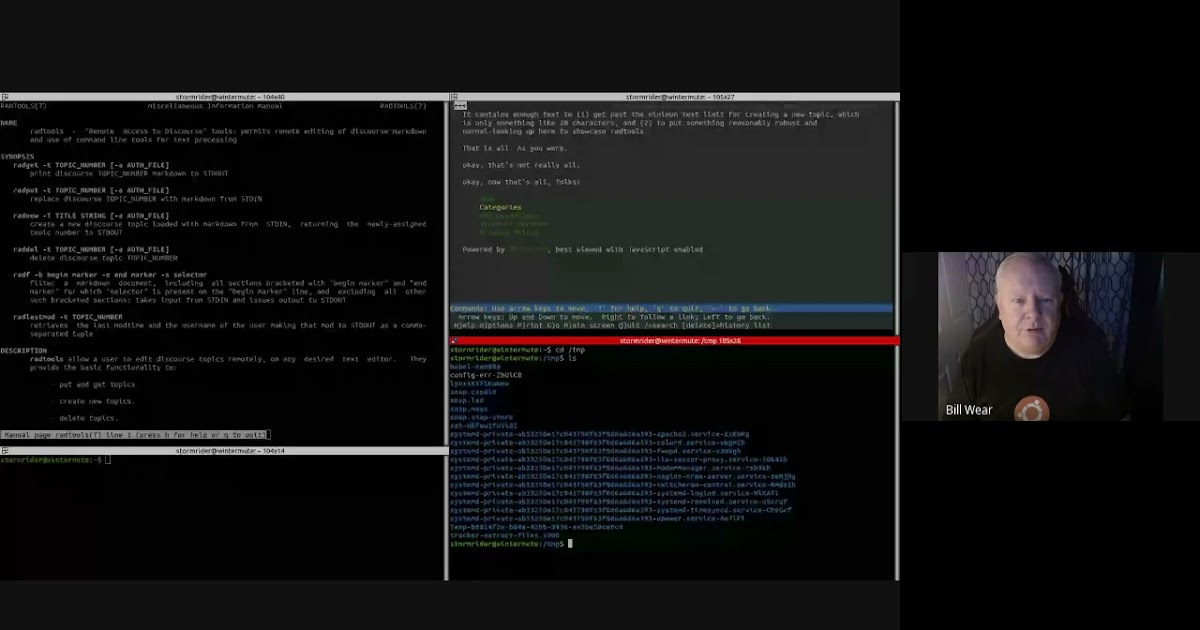 The manpage – which mirrors the talk above – follows:

radf -b begin marker -e end marker -s selector
filter a markdown document, including all sections bracketed with "begin marker" and "end marker" for which "selector" is present on the "begin marker" line, and excluding all other such bracketed sections; takes input from STDIN and issues output to STDOUT

radtools allow a user to edit discourse topics remotely, on any desired text editor. They provide the basic functionality to:

- put and get topics.

- get the time and username associated with the last modification.

- use an arbitrary filter system to include and exclude text sections.

- radRmenu, which adds a RAD menu for "topic-slug" to the top of the output.

These special tools are specific to the MAAS documentation set, so they aren’t explained in manpages, but they’re available as examples if you can use them.

radget is designed to get a discourse topic, by number, and print the markdown for the main topic post to STDOUT. It deals with the main topic post because that is where most discourse-related documentation resides. If it’s useful to someone, it should be relatively simple to add a numeric argument to the argument list to indicate which post is desired. Just remember that only post number 1 (the main post) is guaranteed to be part of a discourse topic.

radput is designed to take markdown coming into STDIN and replace the markdown for the main post of the passed topic number with this incoming markdown.

radnew creates an entirely new post, loaded with the passed markdown. It returns the newly-assigned topic number to STDOUT for user convenience; it’s up to the user to figure out how to capture and employ that new topic number.

raddel deletes the passed discourse topic entirely. This makes the topic invisible to non-administrative users. No warning is given, although for most discourse systems, topics can be manually "undeleted" for an indefinite period of time.

As an aside, radlastmod shouldn’t be needed too much. There is a wonderful report (the Post Edit report) that discourse generates, which is way faster, much less stress on the system, and much easier to see what changed. Even if you use radlastmod, cleverly in a shell script, to get the list of last mods and who modded, you’ll still have to go look at the changes, which means pulling down text and then generating similar, side-by-side text for a diff, and.... Nevermind all that; just use the discourse report, it’s much easier. But the tool is here if you want to use it.

radf filters markdown received via STDIN according to command-line options, and outputs the filtered markdown to STDOUT. A simple example is the easiest illustration.

Suppose that you have sections of your document that you want to include or exclude, depending on which edition of a document you’re publishing. You can use any sort of string for the "begin marker" and "end marker," as long as (1) it’s consistent, and (2) it won’t appear organically in your markdown text.

Markers must appear on lines above and below the text being marked, with the "begin marker" line also carrying one or more selectors. Selectors are simply any text string that you’d like to user to identify sections for inclusion or exclusion. Selectors can appear elsewhere in your markdown text, because only the presence of the "begin marker" + the selector triggers a filtering operation.

For example, if you have two different versions of your product, you might have two paragraphs marked like this:

my-begin-marker Windows
Here is some text relevant to your Windows product. It can be anything you want, and it can contain any text that isn’t the begin or end markers. It can be as long or as short as you want.
my-end-marker

my-begin-marker Ubuntu-20.04
Here is different text, relevant instead to your Ubuntu 20.04 version. Likewise, it can be anything you want, and it can contain any text that isn’t the begin or end markers, even the selector itself:

It can also be as long or short as you want, and contain images, links, or any other valid markdown.
my-end-marker

then your STDOUT will contain the paragraph marked with "Windows", but none of the text marked with "Ubuntu-20.04," like this:

Here is some text relevant to your Windows product. It can be anything you want, and it can contain any text that isn’t the begin or end markers. It can be as long or as short as you want.

A few special tools are currently included with radtools, mainly because they are (1) hard to make generic, (2) unlikely to have value as a generic tool, and (3) probably going away, or at least changing unrecognizably, as Canonical documentation changes over time. For these reasons, it seemed unnecessary to spend the additional 80% of the effort for less than 20% of the gain. If this balance flips, additional tools will be added to the base set.

If none of this section makes any sense to you as written, you probably don’t need these tools for anything much. Of course, you’re still free to play with them on your own discourse, if you want.

What is valuable about these special tools is the general pattern of the code, which should give you a good start on writing your own special purpose tools for your own situation, and including them in this github with similar doc. Nothing wrong with having a big set of special purpose tools: Eventually, one of them will be close enough to something somebody else needs to save them some serious time. That’s what FOSS is all about, anyway.

An example: radRmake
In this shell script, we can see the power of these tools, combined with the command line. With this script, I can make all RAD versions of any master document, without looking up topic numbers or URLs.

It’s pretty simple, and it takes a base URL fragment (the shell $1, in the second line) to match. By judiciously using that grep string, you can match quite a few of the topics (for example, if you enter "machines" as a grep fragment, you’ll update "Machines," "Deploy machines," "Commission machines," "Add machines," ....

Note that wildcards don’t work the same in this context, but because of delays that the discourse server inserts when you have more than 10-15, back-to-back requests, a massive, full-set make isn’t really do-able anyway.

radtools are implemented in Python. They are designed to be standard UNIX CLI tools, taking input from STDIN and sending it to STDOUT wherever that makes sense. Command line options and usage messages are also styled after UNIX CLI utilities.

radtools grew out of a different instance also labeled "RAD," the Canonical Reader Adaptive Documentation project. That project was intended to be a temporary stopgap measure until a better interface could be designed and implemented.

The practice of remote editing, though, is extremely useful to someone preparing documentation for discourse, because:

- it is often useful to have an entire doc set, in plain text, available to grep.

- it is faster and more efficient to work in one’s preferred text editor.

- it is possible to apply UNIX CLI tools to the text when editing documents.

- it is possible to keep a complex master, that is, a master which contains several versions of the documentation, but for which only one version is published at a time.

Since the shape of Canonical documentation is always evolving (a good thing), and since it’s not very FOSS-friendly to write and later discard useful scripts, I decided to make these tools generic and public.

The goal was to write the minimum necessary complement of tools to be able to build special-case scripts for (potentially) temporary situations. Where there were MAAS-specific format requirements, I just create special scripts.

There are two helper files which enable radtools to operate more efficiently: the dc.yaml and rad.db files.

dc.yaml is an API authorization file that contains the username, API key, and API URL for the discourse API being accessed. rad.db is a SQLITE3 database mapping Canonical discourse URLs to discourse topic numbers (only useful for Canonical documentation pages). Both of these reside by default in the directory "/etc/rad".

This utility is part of the radtools repository at https://github.com/billwear/radtools/.

This software is covered by the Simplifed BSD License, which is described at
https://opensource.org/licenses/BSD-2-Clause.