How to proper have MAAS handling IPs. - VLANs question

Brand new here with MAAS, but very close to deploy to a large scale.

The idea is to have servers booting on VLAN100, have the Ubuntu or Windows installed, and then later we moved them out of Build Network (VLAN100).

And continue with different VLANs.

My problem is to understand how I can have servers, that are ready to be deployed, to have the correct IP assigned.

All the IPs will be needed to be assigned static/manually.

In this example I have this server already deployed, but its using the IP from MAAS_PXE.

What I need its to be able to deploy with an IP from QA for example. 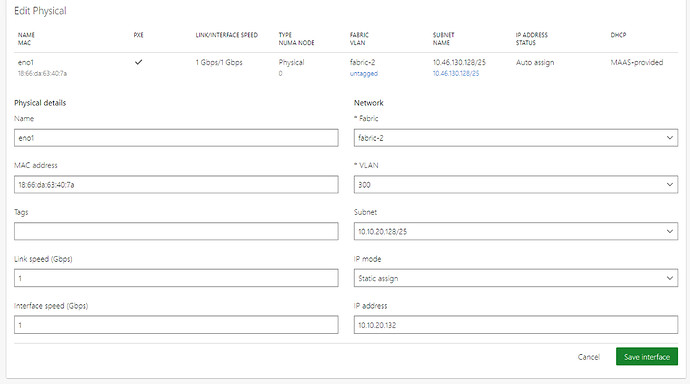 In this example, the server is in NEW state, and ready to be deployed.
If I configure like that and start the deployment of a new OS.

But my question is how is the proper way to have this deployment sucessful?

All my network is based on switch ports with the proper VLAN.
Once the server boots on MAAS_PXE VLAN, its fine, but this same port will be moved out to a different VLAN.

Or have PXE boot into a 2nd interface and use the NIC1 for other VLANs?

The problem to have two interfaces, is that now all the servers can communicate with each other using MAAS_PXE, which it cannot happen.

All this MAAS + Network its kind confusing for me.
Can someone shed some lights?

@junior-c, did you ever get this resolved?

The trick is to make your Layer 3 switch to DHCP-RELAY all your other VLANs to your PXE VLAN + IP (MAAS IP).

Then you need to add VLANs to the same Fabric you are working on it.
On the new VLANs you created, you need to Relay DHCP to your MAAS-PROVIDED unttaged one.

There is also another trick.

For each VLAN you add and each subnet, you need to make a DYNAMIC reservation.

Once the server boots on PXE on any VLAN, it will forward the PXE request to the proper MAAS server and from there everything is just fine.