I have a MaaS controller (all-in-one, v2.8.2, installed with snap on Ubuntu 20.04) and it is hosting DHCP.
It has a bond0 connection which is a VLAN trunk, with the native VLAN being the provisioning VLAN.

I have a node, which I am looking to commission and later deploy, with the same setup - two connected interfaces to the network both are VLAN trunks with the provisioning VLAN untagged.

I am able to PXE boot the node, and it appears to connect to the MaaS server OK. However, on the first PXE boot it just stops at the grub prompt, and doesn’t register or get discovered by MaaS. I added the machine manually and it is able to be powered on and off by MaaS, however when I try to commission the node, I get the same issue: MaaS powers on the node, it PXE boots and connects to MaaS, but then stops at the grub prompt.

I’m assuming it’s either a problem with the bootloader or with the networking setup, but given that the initial connection is made I’m guessing the former.

Looking through other topics (e.g. MAAS Internal URLs) it seems I should be able to browse the bootloader configuration at this page: /var/lib/maas/boot-resources/current. However this doesn’t exist on my controller.

I’ve since re-installed on a new OS and have the same problem, which makes me think I’m missing a configuration step somewhere, but can’t see anything in the docs. Any ideas? I’m not sure where to check the kernel, initrd config and so on.

This is what I see on the node I’m trying to commission: 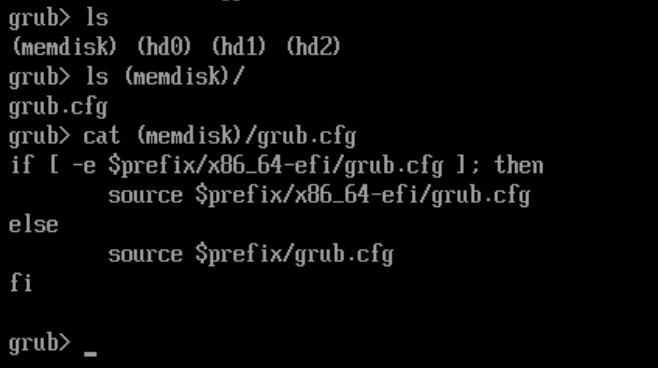 It’s also getting an IP address from MaaS DHCP, on the first connected NIC:

I upgraded by controller to 2.9-beta and the issue no longer occurs - the PXE boot uses TFTP instead of HTTP and it works fine.