One of the things I struggled with in the beginning was not really being aware of the idea that MAAS (regiond) really should have a separate network interface that has internet connectivity, and that this interface is (most of the time) going to need to be different than the interfaces facing physical servers. While it is hinted at from the architectural diagrams, it is not established strongly (or I missed it).

Once I realised that, probably, I need at a minimum, separate logical interfaces for “internet for maas” and “maas provided services”, many things became much clearer to me.

The below diagram from a webinar (https://www.brighttalk.com/webcast/6793/362201/maas-at-the-edge-the-importance-of-bare-metal-provisioning-in-edge-computing) did a good job of illustrating this.

This was important in a lab case since it helped me fix my lab environment (particularly when running regiond and rackd on the same host), but I think it’s also a reasonable clarification to make regardless of whether regiond and rackd are colocated. 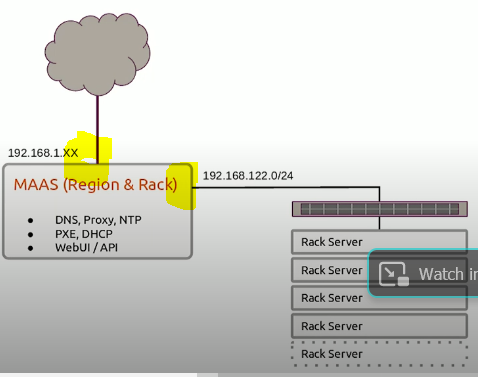