The MAAS engineering team actively works to improve the performance of MAAS.

Recently, we improved the API performance of MAAS, by testing it with simulated loads. For this testing, we made the following assumptions:

To measure performance, we use continuous performance monitoring, arranged like this:

On a daily basis, we generate simulation data based on the assumptions above, for 10, 100, and 1000 machines. These three datapoints help us get a sense of how our performance improvements scale. A Jenkins tool exercises both the REST API and the WebSocket API, trapping the results in a database, from which we can build a dashboard. The dashboard looks something like this: 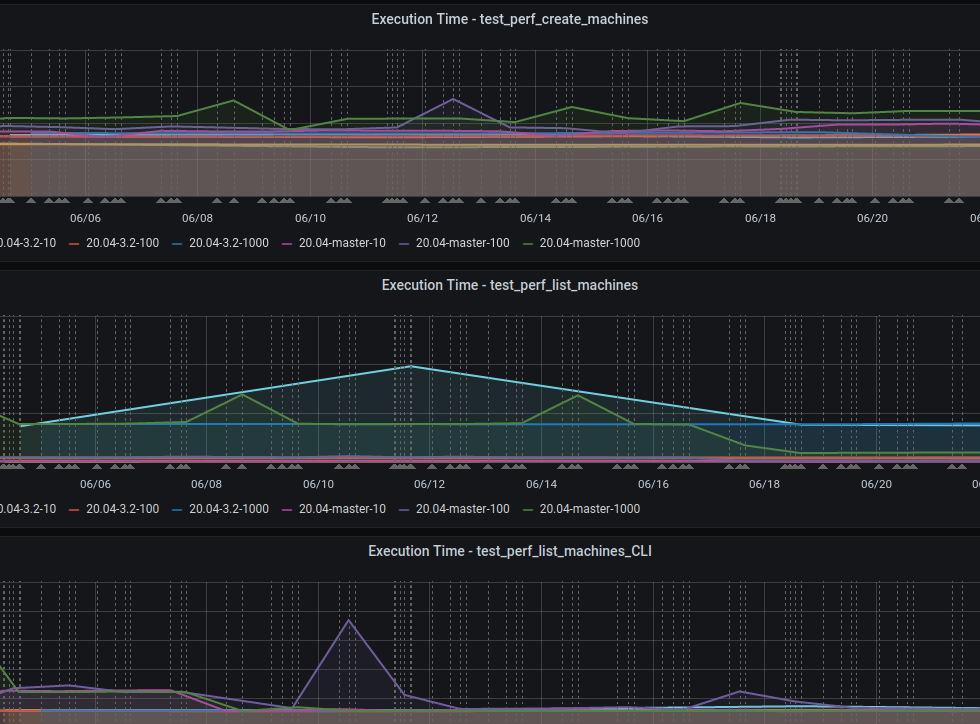 Note that we always compare the current stable release with the release in development, so that we can spot issues before they become harder to find and fix. We also capture profiling data that allows us to find bottlenecks, generating a heatmap that shows which parts of the code are causing issues at the moment.

Here’s a short history of our performance efforts to date:

Note that this list only captures the bigger, sustained efforts, although there is a constant focus on weeding out slowdowns when we come across them.

Collecting your own metrics

It’s possible to collect your own MAAS metrics – and even share them with the MAAS engineering team. We are keen to know everything we can about machine counts, network sizes, and MAAS performance in all areas. Please use the discourse performance forum↗ to share your feedback and observations.

As part of the MAAS 3.2 development effort, we have taken steps to improve the performance of machine listings. To date, we have measured the speed of listing a large number (100-1000) of machines via the REST API to be 32% faster, on average.

Currently, we are actively working to improve MAAS performance for other operations, such as search.